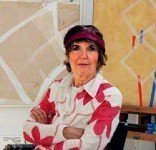 Sandra Blow RA (1925-2006) was born in London in 1925, the daughter of a Kent fruit farmer. She left school at 15 and in 1940 entered St Martin's School of Art. Shortly after the Second World War, Blow studied at the Royal Academy Schools and in 1947 ventured further afield and lived in Italy for a year, where she met Alberto Burri, who was a significant influence on her work for the rest of her career.

Sandra Blow was at the forefront of the abstract art movement in Britain during the 1950s.  Her works are often on a large scale and consist of abstract collages made up from cheap discarded materials such as sawdust, cut-out strips of old canvas, plaster and torn paper. The use of such materials is designed to create an expressive informality and promote a natural, organic feeling. Her works have a tactile as well as visual emphasis on surface, and her use of simple large geometric shapes lends a feeling of expansiveness and dynamism.

In 1957 Blow moved to Zennor near St Ives for a year and in 1960 she returned to London and acquired a large studio in Kensington where she worked on her informal abstract painting for the next 24 years.  In 1967 she started a 14 year stint teaching at the Royal College of Art.  In moving to St Ives during the mid 1990s, Blow came full circle, reinvigorating a Cornish art scene bereft of the glories she had sampled 35 years before.  She exhibited locally but also fulfilled her obligations as a Royal Academician, participating in every Summer Exhibition at Burlington House, where she enjoyed a retrospective in 1994 at the newly built Sackler Galleries.

£2,250.00
Search Products
Filter Options
By Artist
By Style
By Medium
By Price